Morocco was the first third-world country I visited and since I haven’t located my diary from this trip the details are often pretty hazy. I drove there from France in early 1986 via a ferry from Spain with my then girlfriend Dominique, going to Meknes, Fez, Marrakech and Rabat. One not only has to watch out for thieves and scammers in Morocco but in Spain as well. There was a booth for passport control before one drove on to the ferry in Spain. I handed over my passport and then realized that the men manning the place were a group of gypsies rather than officials. I luckily got my passport back and just drove on when they claimed some kind of fees were to be paid.

French was widely spoken in Morocco, so I was glad to be there with a native speaker. A good friend of Dominique’s had grown up in Morocco and gave us the address of friends of his. We showed up unannounced on their doorstep feeling thankful if we would be invited for tea and given a few tips on what to see. We got taken in with unbelievable hospitality by this couple Memon and Badia and spent over a week together. Here was Dominique with Badia, her daughter and sister-in-law. 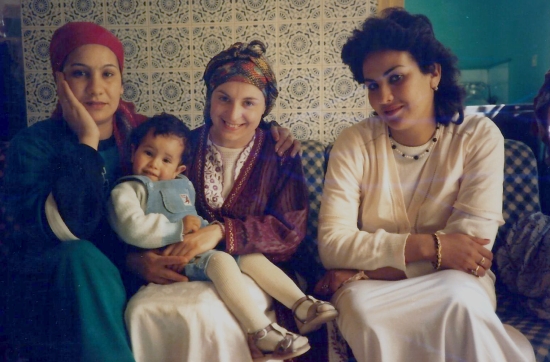 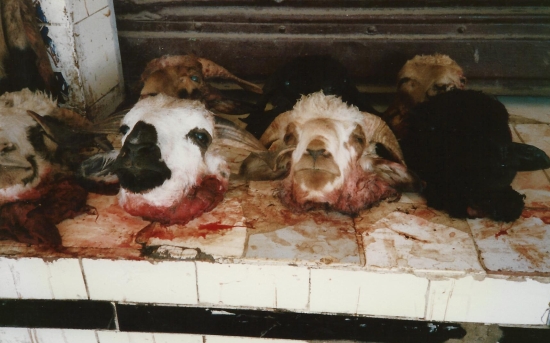 We learned to eat like the locals, which meant taking food with your right hand from a common dish set in the middle of the table. It was always some kind of meat with veggies. I hadn’t given up meat yet and don’t know what I would have done at the time if I had. I had learned to make a good couscous, which has practically become the national dish of France.

I was surprised then to go to the area of its origin and find out that many people preferred the fine-grained version as a desert, sweet, with hot milk, sugar and cinnamon rather than the middle-grained variety as a main meal, salty, with veggies and/or meat. Sheep and goats seemed to be the most common animals eaten locally, often butchered horribly right in the markets.

Our hosts took us to relatives on a farm where we experienced the traditional lifestyle in the countryside. The patriarch of the large family, with I’m not sure how many wives, was very curious if his cows imported from Holland shouldn’t be producing much more milk. Although Dominique and I were living on a rural farm in France, I had to admit ignorance of such things although I supposed that the abundance of nice green grass in Holland must make some difference. 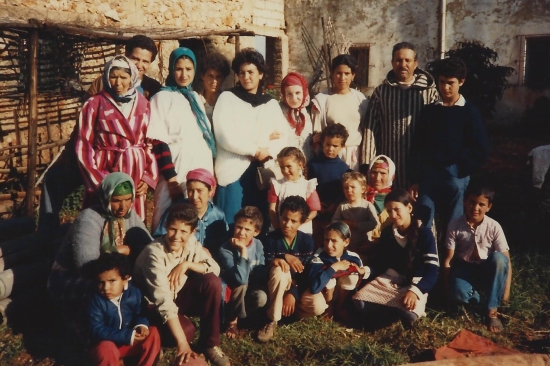 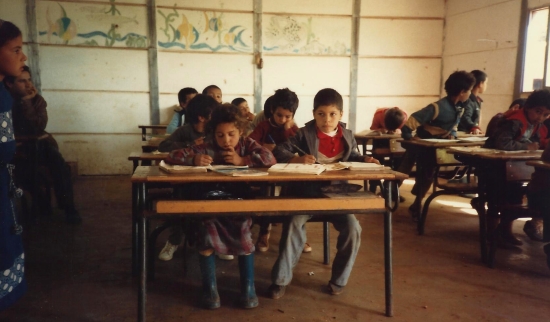 Visit to one room schoolhouse

Memon was a teacher and we went to the rural one-room schoolhouse where he worked and I made a juggling show for the kids. There were at least 2 classes in this room, 1 always had to wait while the other was taught. This was one appropriate place where we could donate pens and colored pencils, which we had brought along from France. We had taken a tip from our French language travel guide to take these along as gifts. We found that every kid on the streets of Morocco would come demanding “stylo, stylo” or “pen, pen” so obviously others had taken this tip and freely given pens away. I really have to recommend that people don’t do this because it just encourages kids to beg.

Together we visited many places we would never have dared or thought to have seen alone including the inner courtyard of this mosque and Koran school. 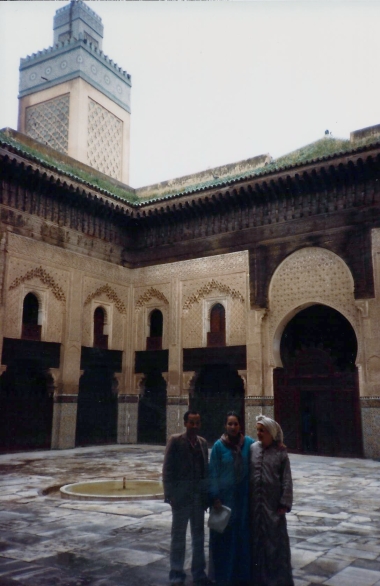 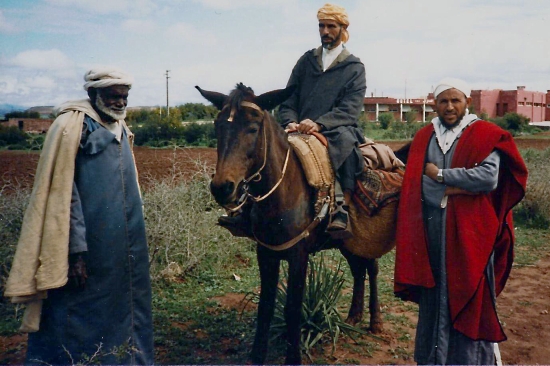 Many Moroccans dressed in robes and one saw lots of goats and donkeys around. It reminded me of the old biblical movies one used to see on Sunday TV in the States during my childhood, it was all very colorful and intense. While visiting Memon and Badia, we left Dominique’s car on a guarded lot. The attendant was an older guy bundled in such robes who carried a large staff. He not only looked the part but I suspect actually was a shepherd who had found work in the city, keeping the thieves at bay from the cars not unlike keeping wolves from the flocks. His image was one of my favorite photos from M orocco but seems to have gotten lost. But these guys give one the idea.

It was also a bit awkward that Dominique as a woman would have to do the talking for us both. While visiting some places, she was off with the women and I would be left alone with the men. I asked about the attitude towards women and was assured that their religion and culture much respected women and any restrictions were only to protect them. I keep it to myself but wondered what they needed protection from if the men would really respect and not mistreat the women.

I have to mention that there were many Lebanese engineering students at our University. They were predominately the stereotyped super machos who would go to the discos to dog after women for quick sex. A couple of them confided in me that if one of the few female Lebanese students as much as kissed or dated an American that they should be killed to save the family’s honor. This sick concept of honor killing is often argued in terms of Islamic teachings yet these students were all Christians! Obviously, it is a cultural thing rather than strictly a religious one. Still, it was a new experience for me to see women shoppers on the street in such dress.  One often saw the men hanging around somewhere, chatting with each other, drinking tea or like in this photo, playing a dominos like game. They also wore tradition dress but one assumes it was voluntary. 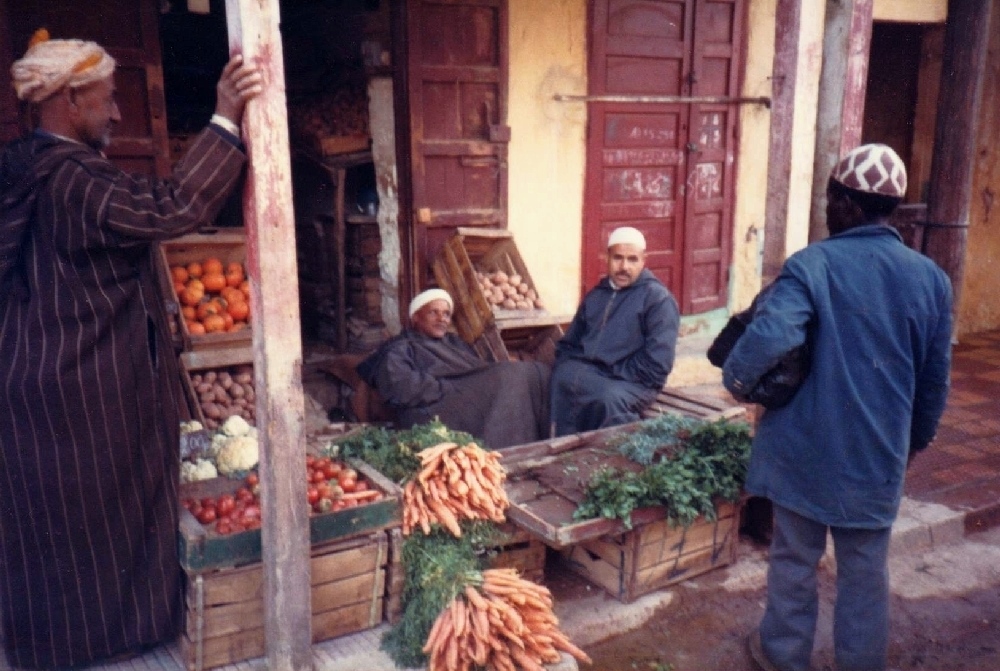 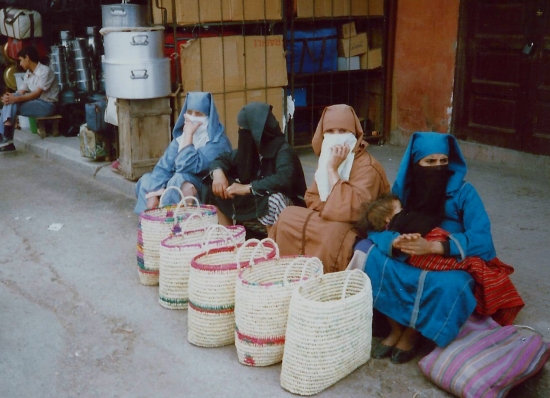 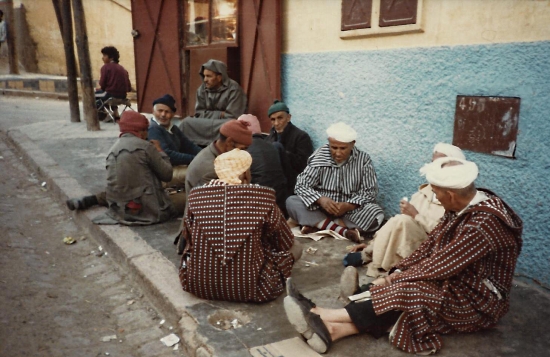 Meeting the people in the countryside

The landscape on our travels was dry but not quite the barren desert one would find father south. Occasionally, we stopped and chatted with such people riding horses or camels or grazing their animals. 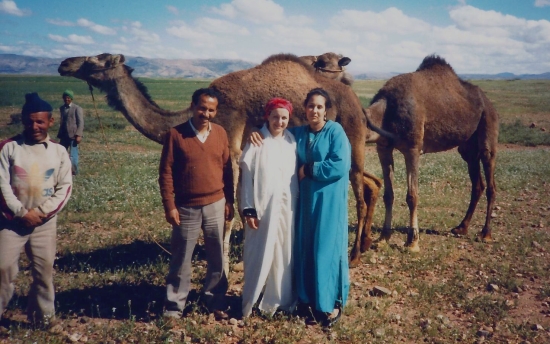 One would come across these villages or towns with their fortified walls, which seemed like a mirage in the barren surroundings. The kids in such places were very curious yet just like in more touristy spots they tended to beg shamelessly. 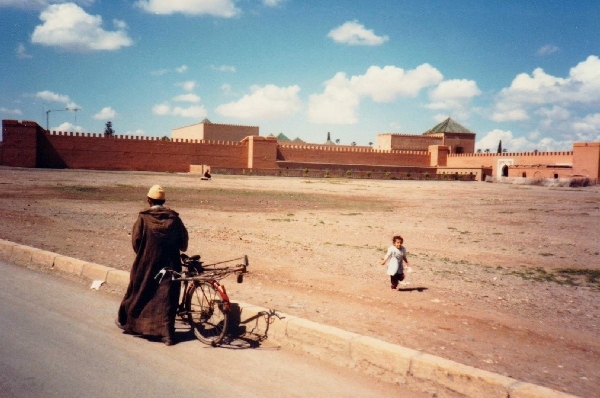 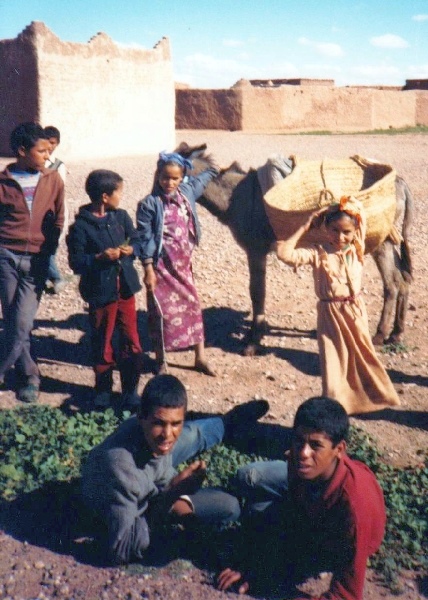 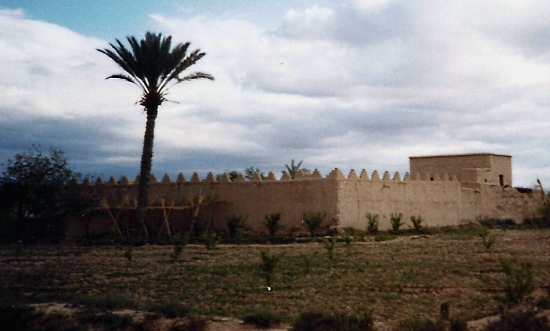 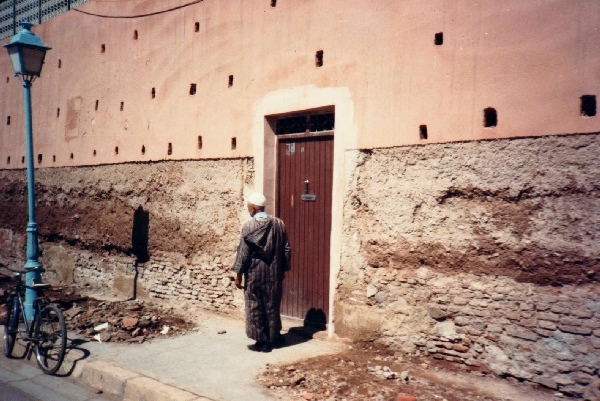 The next photos are from Marrakesh, which was a beautiful and wild place. I had to think of the popular song about “going to Marrakesh” and of some of the hippy road-trip novels set there. The first 2 photos are from the main plaza Djemnael Fna in the center of the old city. There was always a lot going on here, people eating, making shows, taking photos etc. These characters were selling water, which one drank out of their brass cups. I guess this was some sort of tradition going back to a time before travelers could get bottled water. I don’t know how much water these guys really sell because their main business seemed to be demanding money to have their picture taken. 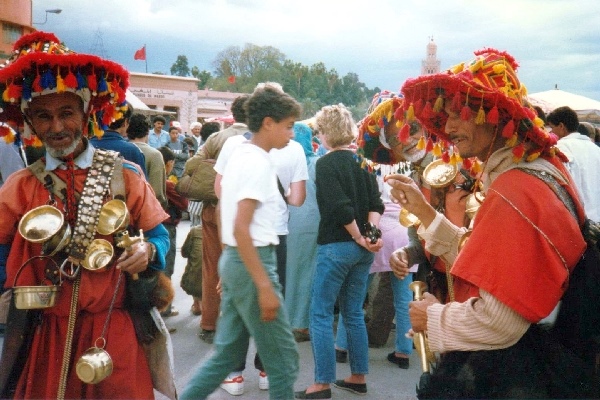 This shot shows the proverbial snake charmers. They did have live snakes but always had a couple of stuffed reptiles set out to grab your attention and draw a crowd. I have heard of Europeans juggling here but they mentioned that money is usually collected before you do anything and that the locals didn’t really appreciate outside competition.

Shopping in the souks

I would wander through the old markets known as Souks, incognito in my jalaba (traditional hooded robe) pretending disinterest in the souvenirs. Then our Moroccan friends Memon and Badia pictured here with Dominique would go back alone to buy what I wanted for a much better price as everything in Morocco costed at least double for foreigners. 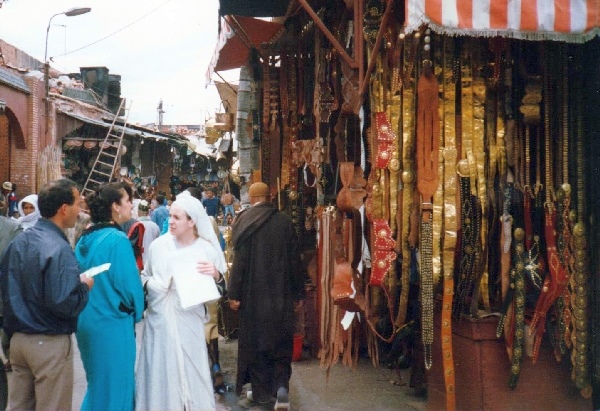 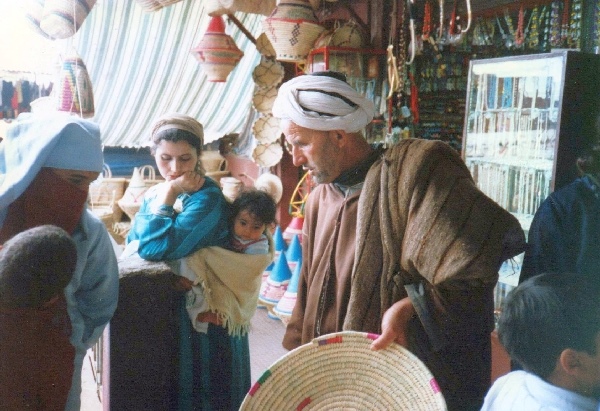 Throughout Morocco, the cities would have a preserved old city called the Medina characterized by small winding streets surrounded by fortified walls with many decorative gateways. Within the Medina was the all-important market place known as the Souk. The narrow streets here were often covered to give shelter from the sun. As foreigners we were always targets for someone to drag us into their carpet or souvenir shop. They would give you tea and then the hard sell and in one huge place they claimed with a straight face that all the merchandise would only be there today, tomorrow the place would be emptied. I got suckered into over paying in such a place for my jalaba but it would prove invaluable as a disguise. 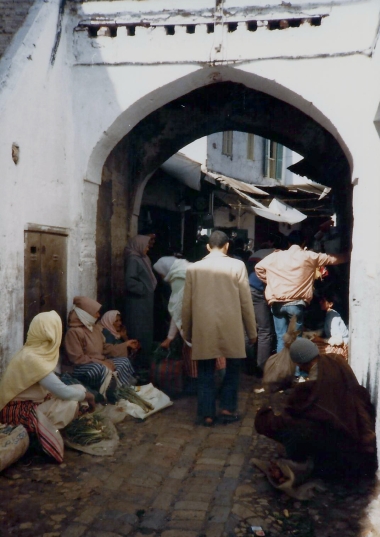 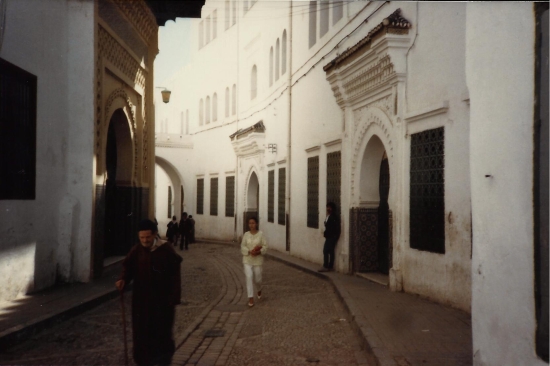 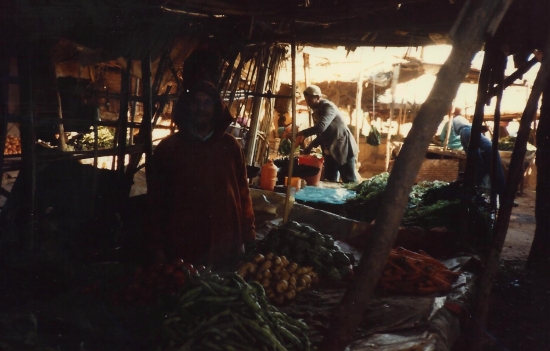 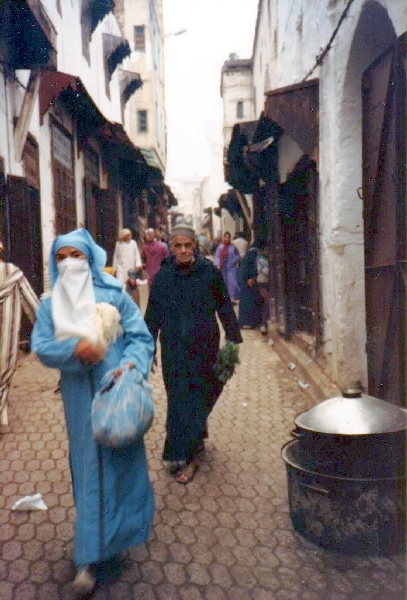 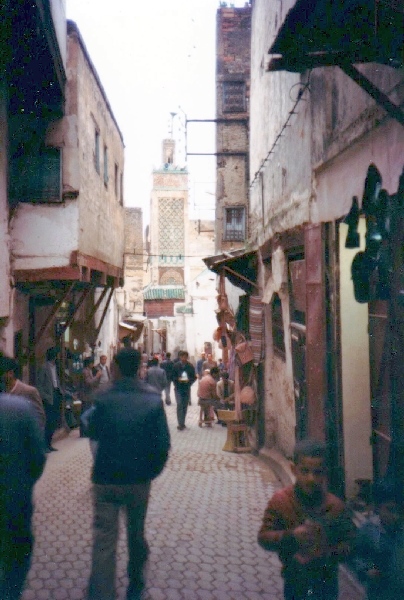 This is me in front of the main gate in Meknes, Bab al-Mansour, which was full of architectural wonders. The most unusual experience was taking a tour of subterranean Meknes. Long ago a European architect was imprisoned and to gain his freedom agreed to design a vast underground complex in Meknes. There were warehouse, stables, barracks, aqueducts and a prison there. It was hard to have any bearings as there are countless similar archways throughout and they stressed that one should stay close to the group as it had happened that a tourist had wandered off and gotten lost in the immense maze.

In a kingdom full of impressive architecture, this was one of the most spectacular places we saw. It is a complex in the capital city of Rabat with a mosque, minaret and mausoleum. The mosque and minaret were planned to be the largest in the world but building stopped upon the death of the Sultan in 1199. As at the various royal palaces, the complex was patrolled by the red clad, white caped royal guards. 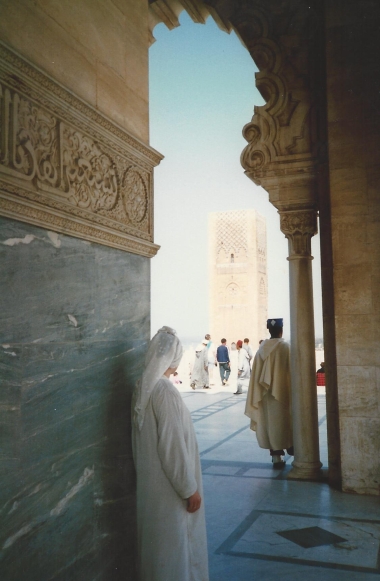 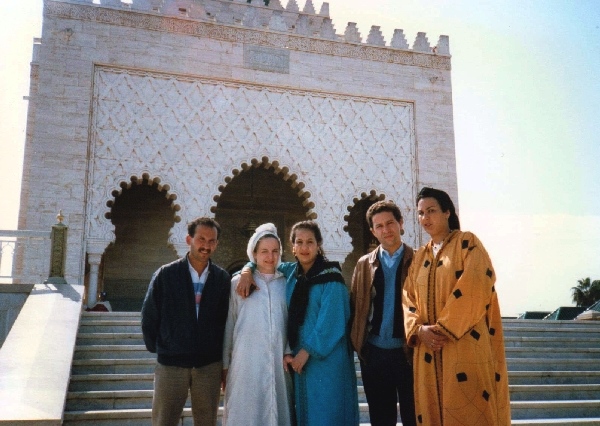 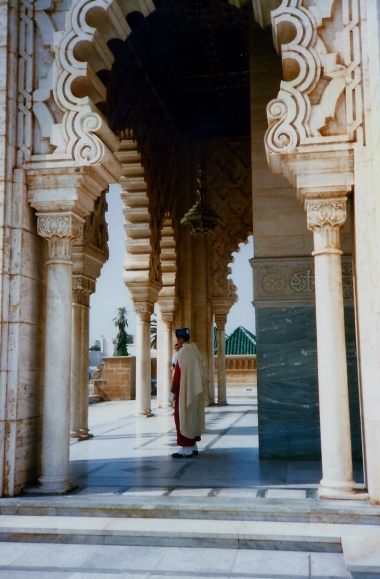 The beautiful old architecture adorns even many small buildings and arched doorways not just palaces and fortresses. Like in Europe where one might see a quaint little chapel near a huge cathedral, one often saw such a humble mosque within the shadow of a towering minaret. 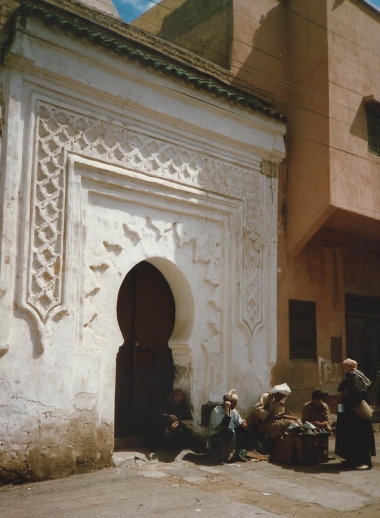 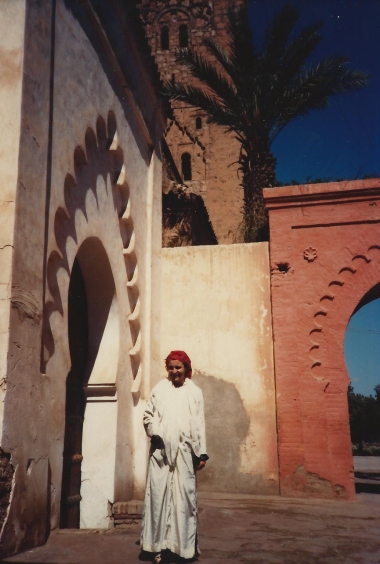 Before we left Morocco, Dominique had her hands and feet decorated with henna, which was applied and dried over a small charcoal fire. Such intricate designs would normally be done in preparation for a wedding. On a more daily basis, the rural women would just coat the whole inside of their hand with a solid coat of henna that didn’t look so nice but supposedly protects the hands.

The finished product, which shocked her father as he saw her upon arrival late at night back in France and at first glance thought she had injured herself. 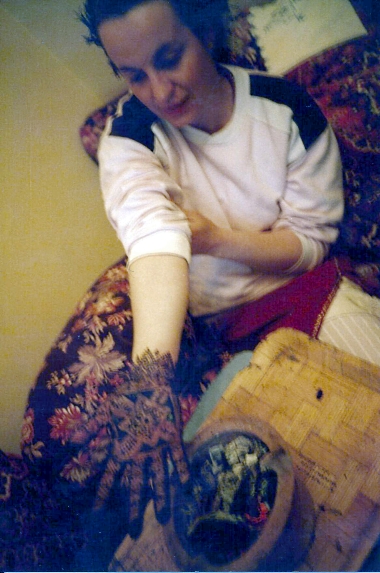 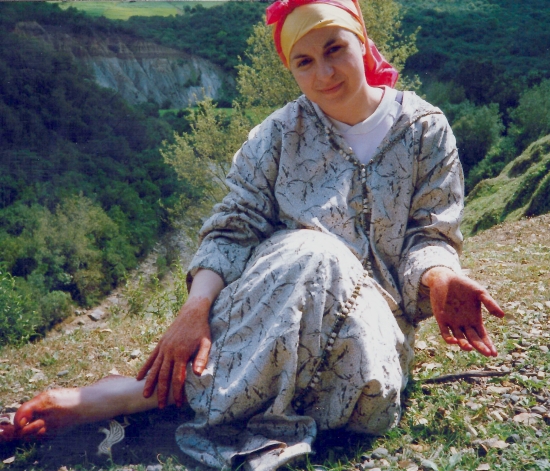 Upon returning from Morocco we passed through Spain with hardly a nod but when we got to the French border, hearing where we had been, they tore our car apart looking for drugs. Because of my sinus problems and the often dusty conditions we had encountered, there were numerous wadded up pieces of snot filled tissue in the car. I had to smirk, as the border police opened yet another tissue thinking they would find contraband inside, only to find something unpleasantly slimy. They got so fed up with this that when they finally opened the trunk, which was completely filled with trinkets, they took one glance, slammed it shut and sent us on our way.

So, those were just a few tales from my many travels over the last thirty and something years. I hope you've enjoyed another side of a traveling clown! If you want, write me an email or better yet, book my show or set a link to this website or just state me as the beneficiary of your will!

To book or see more information about Tom's clown show and entertainment, visit one or both of his clown websites: