I went to Brazil in Jan 2003 visiting Rio de Janeiro, San Paulo, Ouro Preto, Minas Gerais, Salvador de Bahia, Florianopolis, Foz de Iguazu, Ilha Grande, Ilha Santa Catarina, Parati, Trancoso and Itacare. Unfortunately, I didn’t have a real camera, just a couple of cheap disposable ones and only have a few photos from this whole trip – most of which below are from the beautiful city of Ouro Preto.

Arrival in Rio de Janeiro & getting by in Spanish

Somehow I got by with my lousy Spanish, being able to read a lot of the Portuguese but I never did manage to get an ear for it. Surprisingly many of the well-educated people knew some English as well. I arrived in Rio de Janeiro and started having chest pains at the airport after I picked up my luggage. I was escorted through customs right away and taken to the airport doctor. They couldn’t make any particular diagnosis but assured me that I wasn’t having a heart attack or anything serious. Their service was free and very supportive.

I got a hotel room but also contacted an Argentinean juggler living there that I had found over the Internet. Eugenio made shows and taught circus skill at the Fundacao Progresso, a huge cultural center where courses and events are held. A couple of days later, there was a clown festival called “Anjos do Picadeiro” Encontro Internacional de Palhacos held in a theater which was hosted every 2 years. Eugenio got me free tickets and introduced me to some of the local performers.

This was great to hang out and find about the city from local jugglers and when I returned to Rio at the end of my trip, I spent a few days at Eugenio’s place in the hip neighborhood of S. Teresa. It was the end of carnival and hotel rooms were not to be found, so he really saved my ass in addition to being a great guy to hang out with. It was strange though that we actually spoke German most of the time as he had spent a year in Germany as an exchange student.

The following 2 photos were taken at a special event in connection with the clown festival. Rather than being held in the main theater, a group of performers were taken to this venue in a poor neighborhood where cultural events are presented under a tented construction. After the show, we heard lots of shooting and were told that it was just the local drug dealers’ way of announcing that they were open for business and not a gang war. I kept out of the line of fire just in case any stray bullets might fly our way. 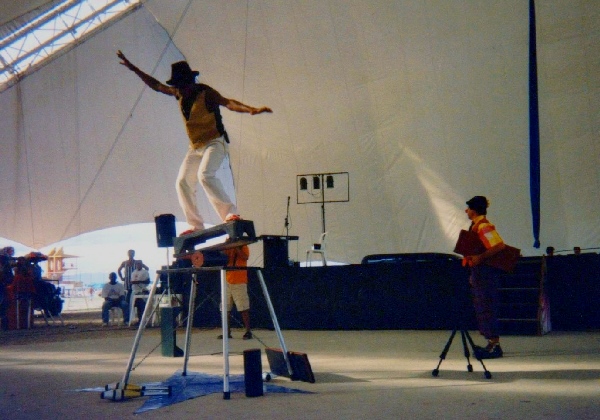 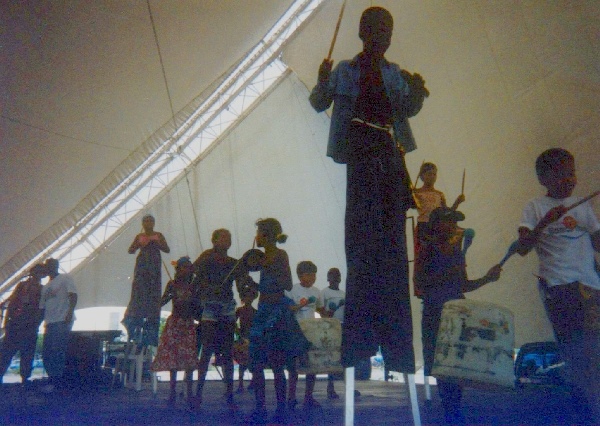 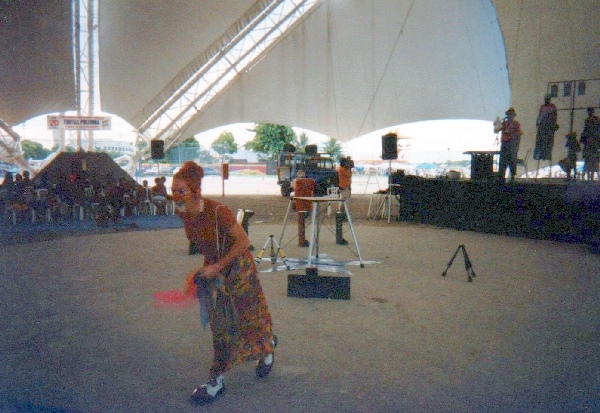 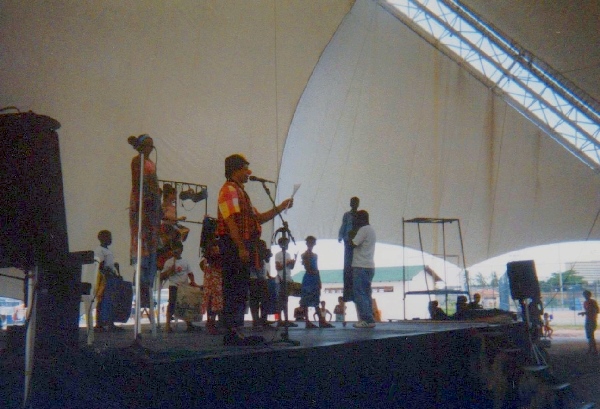 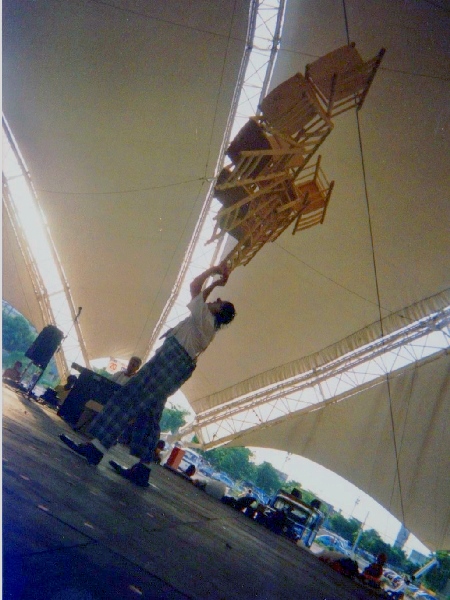 People ask if Brazil was dangerous, well big cities like Rio and San Paulo are like New York City. You have to keep aware and not look like an easy target and stay out of the bad neighborhoods if you have no business being there. Going out to enjoy the great nightlife should not be missed but then you take just enough cash to enjoy yourself and leave ALL valuables at your hotel.

Contrary to what one hears in the media, thieves want your cash and don’t usually shoot people just for the fun of it. Most murders are gang and/or drug related. In smaller communities, especially beach towns, things are so laid back that one may get over confident and forget that there are still risks. In these aspects, Brazil is not really much more dangerous than many countries.

Ouro Preto has lots of old colonial buildings. The Europeans that came to the Americas were hot on the lookout for riches like gold. This area of Brazil is known for its many minerals and there was an extensive gold mine in town that one can visit. The story is that a black slave worked there and stashed enough gold away on the sly that he later not only bought his freedom but bought the whole mine. Hard to believe such a thing could be pulled off but that’s the story. 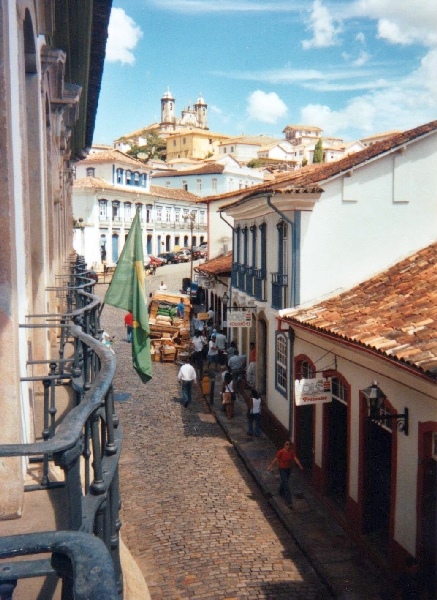 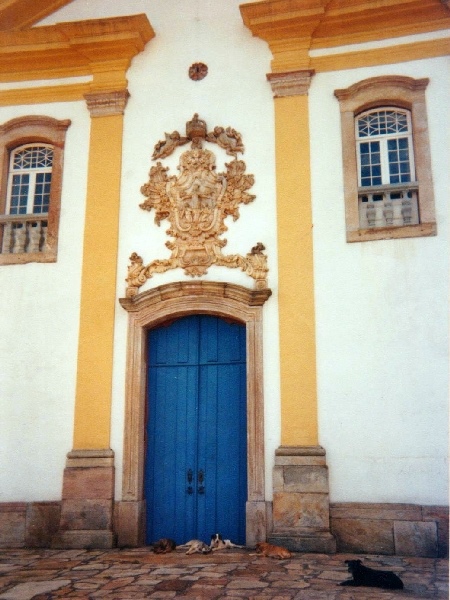 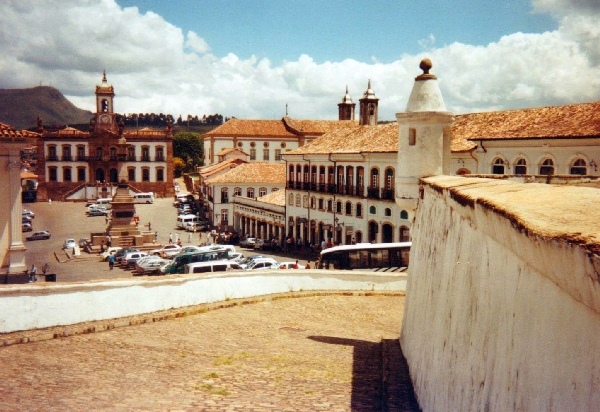 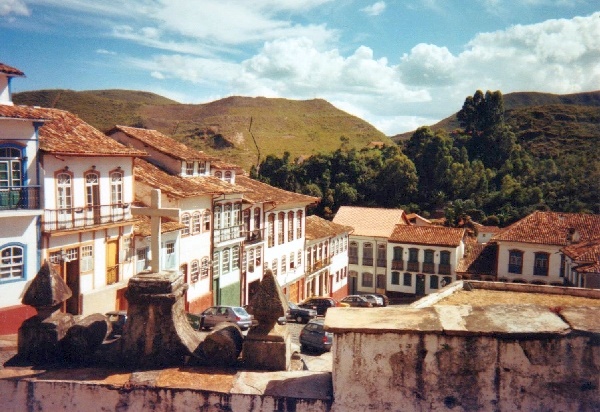 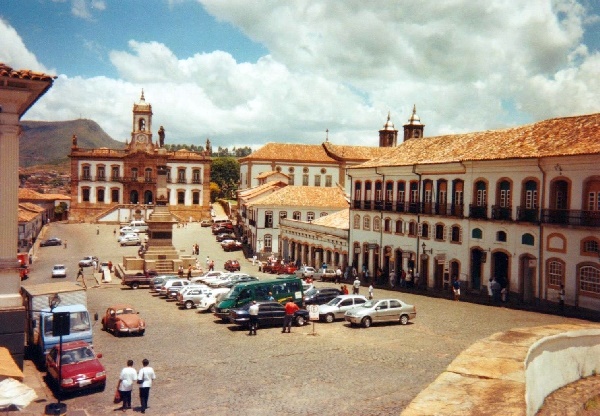 These decorations on the street in Salvador de Bahia were for the upcoming carnival. Of course it is best known in Rio and Salvador but actually it is celebrated everywhere to one degree or another. I spent the first few days of Carnival in Salvador de Bahia. Normally it would be impossible then to find accommodation, prices being very high and usually requiring a week long minimum booking well in advance. But I had met a Brazilian doctor back in 1983 in Athens. We travelled together to Portugal and in the next couple of years met up again in London and New York. After having lost contact for 15 years, I gave it a shot and looked in the phone book in Salvador and found her listing. Her fiancé seemed rather skeptical of me but she and her son were gracious hosts.

San Francisco & Our Lady of the Rosary Churches in Salvador

The stage with the women puppets was set up on a plaza in front of the Igreja e Convento de São Francisco aka the Church and Convent of San Francisco. This was in the center of the old historical district known as Pelourinho. The photo lower to the right with the purple church towers was in an adjacent area. Igreja de Nossa Senhora do Rosário dos Homens Pretos aka The Church of Our Lady of the Rosary of Black Men. It is elaborate and is well known for being built by the society of Afro-Brazilain brotherhood. 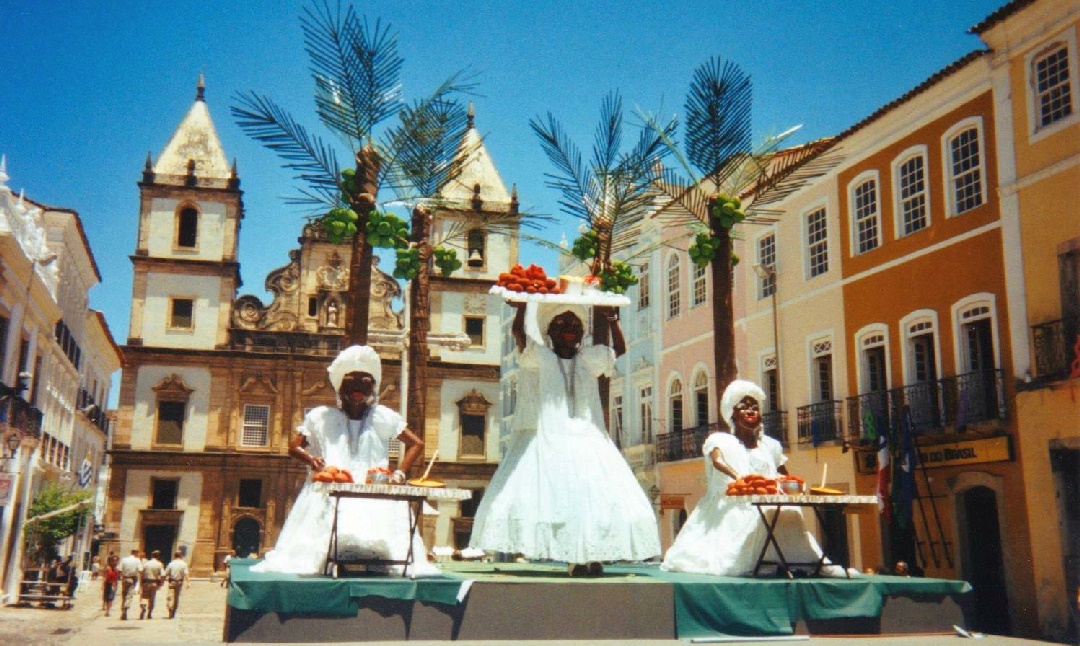 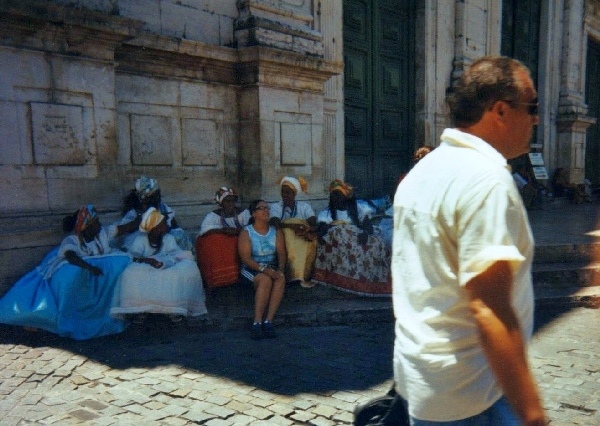 From Cebeles apartment, I could walk to the beachfront where the parades marched along. There were big floats playing music surrounded by a thick rope held by a hundred people or so. One bought tickets to be a part of such a group and got admitted within the rope and got drinks while marching along. I was happy to be outside going where I wanted.

The main attraction was supposed to be more security inside the ropes. The first night I stayed out late and everyone seemed to be enjoying him or herself. The next night I saw groups of young guys with their t-shirts wrapped around their fists to protect their hands like boxing gloves as they started numerous brawls. The clusters of patrolling police battled these guys but couldn’t be everywhere at once and looked just as threatening as the troublemakers. The atmosphere was pretty heavy anyway you looked at it.

I then spent the last couple of days of carnival in Rio. The parades with elaborate costumes seen on television are actually in a long stadium called the Sambradrom, which is a costly, high society thing to attend. I went to a simpler parade in the afternoon by Copacabana. A very popular theme presented was “fuck Bush” signs. Yep, one thing connecting poor and rich and people of different cultures and races is their hatred for Bush. Like he proclaimed, “I am a uniter not a divider” although I personally think this was an admission of poor math skills, like not only can’t he speak English but addition is enough trouble for him not to mention division.

But I am jumping around here with my travels in Brazil. After arriving in Rio I went on to Foz de Iguaçu at the meeting point of Brazil, Argentina and Paraguay. There is a nice town there that has prospered from the tourism to one of the world’s most spectacular natural wonders. Through my hotel I arranged a tour to the falls, which included a trip over to the Argentinean side. The setting is tropical vegetation and numerous falls. The views are not only better from the Argentinean side but there is also an extensive well-built walkway that makes it not only easy to walk around and see things but helps keep the tourists on the path instead of trampling the flora and possibly falling over an edge.

Butterflies beautiful, Paraguay not so much

There were many beautiful butterflies here that would land on you to drink your sweat. Supposedly they like the salt but who knows? I went across the border to Cuidad del Este, Paraguay. This is a village that I can only describe as a shit hole. There is nothing of interest and lots of questionable characters hanging around. Every other store had a guard or two watching out front with a shotgun in hand. Seemed the epitome of a bad border town.

From Iguaçu I took another long bus ride to Florianopolis. This was a lively good-sized city, which is a transit point to the beach towns on (island) Ilha Santa Catarina. I hung out on some nice beaches and got to see how many of the beautiful people of Brazil spend their holidays. Swimming, surfing and partying like there is no tomorrow. I also took a look at a couple of nice beach towns down the coast from Florianopolis.

My next main destination was Ilha Grande. The whole island is a protected nature reserve ultimately belonging to the military but there is a village catering to the tourists. This was one of the priciest places I saw but it was very beautiful and I got to visit a Brazilian-German couple I knew from Konstanz, Germany where I often performed in the summer. One cannot own but rather long-term lease a place on the Island and they were having a small house built on an amazing plot of land amongst a cluster of about 8 houses overlooking the bay.

One had to hike at least 20 minutes up a steep trail but they had fruit trees and it looked like paradise. They told me they were having legal problems getting the house finished. They had gotten the permits but then some locals were jealous and grumbled and suddenly they weren’t supposed to be allowed to build a second floor. People assumed they were rich because he was often in Germany to work although he worked mostly as a waiter and they lived in a small room with their son in a communal house with hardly more than the cloths on their backs.

Parati on way to Minas Gerais

From Ihla Grande I went to Parati a beautiful old colonial town on the coast between Sao Paulo and Rio de Janeiro. It was well preserved and full of shops selling not just the normal trinkets for tourist but also high quality woodcarvings and paintings. Upscale and touristy but still reasonably priced. From here I went to Minas Gerais. Besides Ouro Preto, I saw the cities of Sao Joao del Rei and Tridentes that were also colonial gems blessed by mineral wealth.

Then I headed to the coast of Bahia. Trancoso and Itacare were both great laid-back beach towns with where many foreign travelers hung out. Trancoso was only complicated by the fact that the village was a long, steep walk up from the beach. Itacare was my favorite place with a number of great beaches to walk to and I very much enjoyed the atmosphere at Lawrence’s surf-house. The owner was a surfer who had traveled a lot himself and he did okay for himself especially because he spoke good English but he lamented that since the Brazilian currency had been devalued, he could hardly afford to go abroad any more.

So, those were just a few tales from my many travels over the last thirty and something years. I hope you've enjoyed another side of a traveling clown! If you want, write me an email or better yet, book my show or set a link to this website or just state me as the beneficiary of your will!

To book or see more information about Tom's clown show and entertainment, visit one or both of his clown websites: