This was a business trip rather than a vacation as I was only in Kuwait City for a weekend. I saw next to nothing beyond my performing situation, neighborhood around my hotel and the route to the airport. Yet I thought some reflections might be worth sharing. In 2014 I was contacted by a booking agency in London. I had had a few inquiries from them for events they were organizing in Germany but had never been hired by them. But another London based agency had hired me not long before for a gig in Austria for another Middle Eastern company. This had gone well and it was clear that some such organizations have money! And they put a great emphasis on having entertainment for the kids involved.

The event in Kuwait was to be a party for the workers of a company that owns various banks and other financial institutions. All of the employees and their families would be invited and they would have a whole amusement park for themselves; some thousands of participants. I should make shows and stroll around the park entertaining people. All of the parties did their best effort but it was still a bit complicated to organize. The main problem was that there was the end client who had a local agency organizing the event and they in turn contacted the London agency looking for outside entertainment. 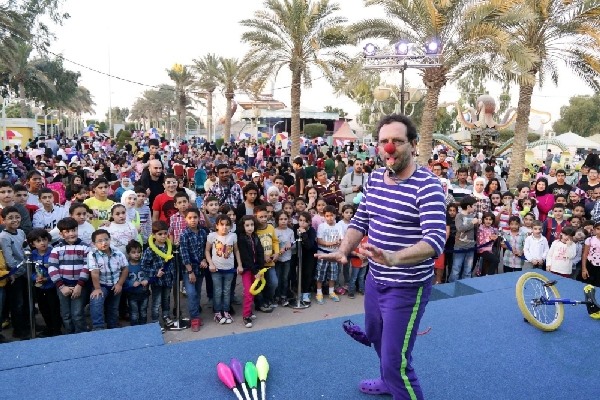 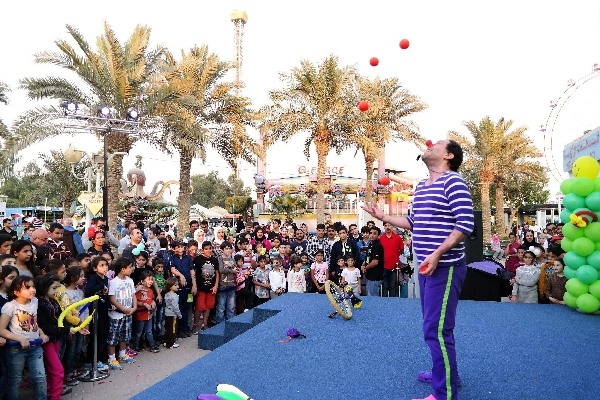 I guess they wanted something not seen there before and it always sounds good to offer an international performer as something exotic. The difficulty was the communication about expectations and how things should run with so many parties involved. No, one is not allowed to contact the client or Kuwait agency.  Information gets passed on through a chain of people. I wasn’t going there for an extended job, just one day of performing. The legal situation was not really clear. They said it’s all arranged – but one should not mention being there to work. Nothing exceptional about a guy flying from Germany with a suitcase full of juggling, clown equipment and a unicycle for a weekend of sightseeing of course.

And maybe someone would meet me at the airport – or maybe not. If not get a taxi at night in a strange town and country. To my relief someone was not only waiting for me, they facilitated everything. I didn’t even have to talk to the passport control or customs people in the end. Then my facilitator put me in a taxi and said it was arranged that the people at the hotel reception would take care of payment. Good thing since I had no local money. I had a bit of a scare upon arriving at the hotel when the guy first claimed they knew nothing about taxi payments but eventually they straightened it out.

The hotel was nice. A European chain known in Germany. I’m sure not luxury my rich Middle Eastern Standards but very comfortable with a lot of western business people as clients. Food was good. Only alcohol free beer available but I took a pass. I got picked up rather late in the evening by the head guy from the Kuwaiti agency himself. He took me to the amusement park to look over the setup. Got taken back to the hotel. The next day I was picked up fairly early and again went through the park considering when and what to do. They had a stage set up where I would do at least a few shows but it was open if I would use other spots. 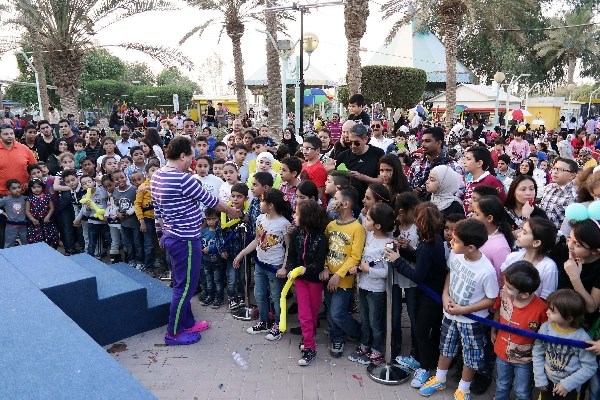 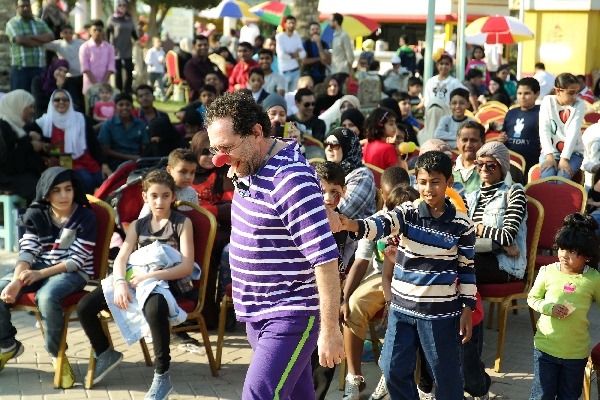 In the end I played around in the park sometimes juggling while riding my unicycle throughout. Shows all got done on the stage. Situation was almost ideal. There was seating for around 500 people and I warned the security to keep the kids from storming the stage. Yet I could still go down and take volunteers from the audience. It was rather hot in the midafternoon but otherwise all went well. Well almost everything. The complication was the Muslim prayers that get done multiple times a day. For some reason they scheduled it so that 2 of my 4 stage performances got interrupted. This meant pausing in the middle of the show. Interesting enough they later had raffles and other games on the stage that didn’t get stopped by the prayers but who am I to judge the difference.

Of course one has to keep such a performance within limits of family entertainment but being a provocative was OK. Nope, nobody was out to kill me for being an American or not being Muslim. On the other hand, one of the requirements to get into Kuwait was not to have any evidence of having visited Israel in one’s passport. I haven’t been there so this was a moot point but still a little strange. Despite any political or religious differences, it seems excessive that they would ban not only Israelis but anyone who might have been there – even if it was to support a peace project or help Palestinians. 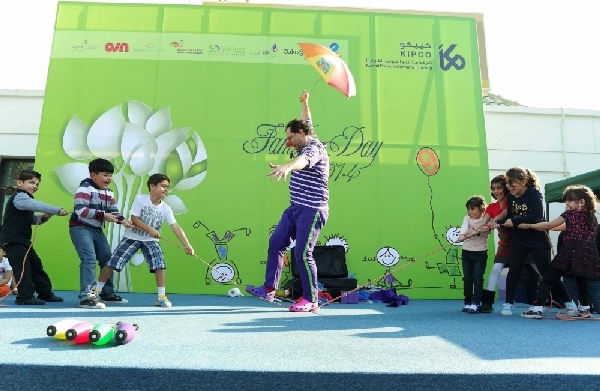 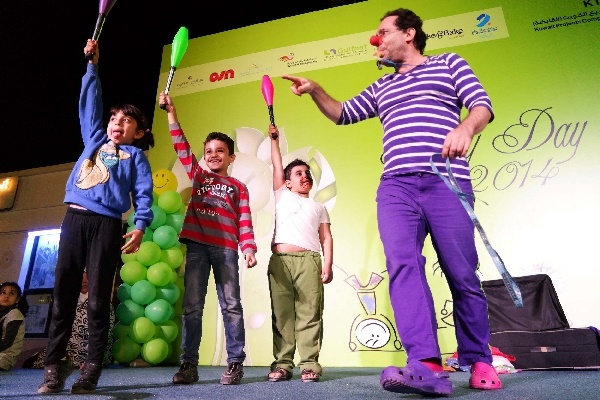 As one can see from the photos, the audiences loved me. I did a family friendly show and the kids were more than happy to jump in and get involved. That’s my specialty, to integrate my audiences in a positive way.  I performed silently like I usually do but then they also requested an extra show at the end and didn’t I have all new material. Thus I improvised and did a lot of nonsense including getting kids up and interviewing them and joking around. It was as much a first time for them as it was for me but most managed with fairly good English. Of course these were professionals in the finance industry so one expected a high level of education.

They had a good female moderator who said she was often working in Dubai. There was a lot of getting kids up and talking about thing in addition to some games and raffles. At one point a group of people in costume walked through handing out some premade balloon figures. But they only had a couple of things, like swords for the boys and a flower for the girls. I was the only true kids’ entertainment of any caliber. I was decently paid but later wondered if I shouldn’t have asked for more. For the size of the event and circumstances I thought they could have hired a few more acts like mine. 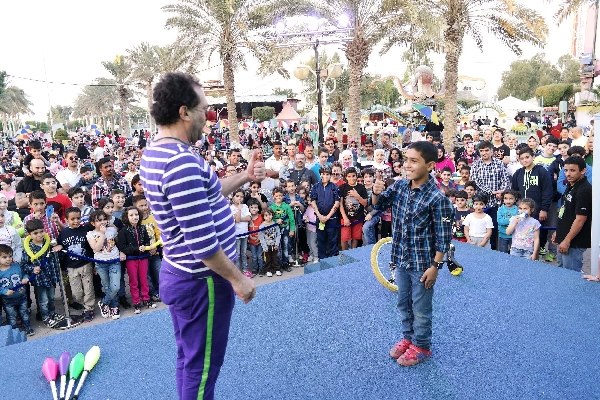 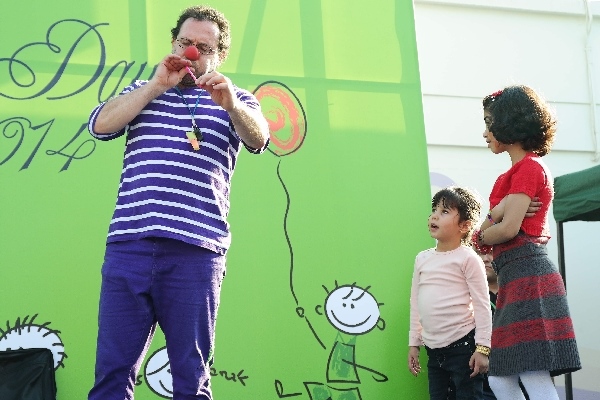 Recuperating & seeing Kuwait – or not

By the end of the day I was content and was invited to stay and socialize with the crew but was dead tired. I slept well at my hotel and reconfirmed with the people that I could stay until I had to leave as was promised by the London agency. But I’m still not sure they realized that they would actually have to pay a third night for me. The problem was the flight connections. There was no flight the next day; it was in the early morning of the day after – something like 2 am. I knew I would be tired the next day but had intended to look around the city. The problem is that I would have had to check out by noon. Then I would have to hang out in the lobby the whole evening until needing to leave around midnight for the airport. Thus I had required I would keep my room until departure.

The day after the gig was just time to rejuvenate. I had intended to see the center. But most of the information I got made it sound like there wasn’t much to see other than a museum or two that might or not actually be open. Most anything of interest had been destroyed by Saddam’s invasion. Things had been rebuilt – and from the looks of it little expenses spared. But the architecture I saw was all modern without character. Also I had no local money and was a bit warry of somehow missing my flight. Thus I just looked around by foot from the hotel. It was just a few hundred meters to the sea. Much of it lined with wide sidewalks and park where many families were making picnics or eating at the outdoor eateries. 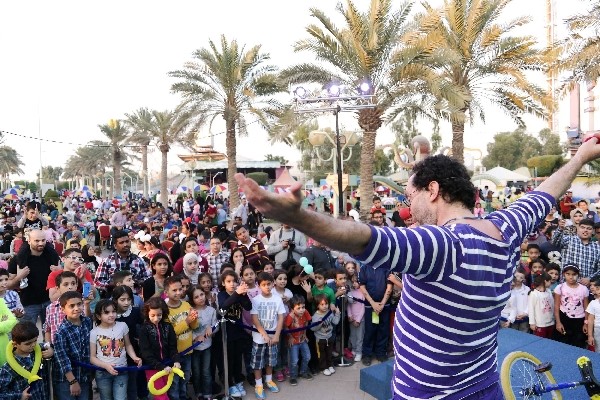 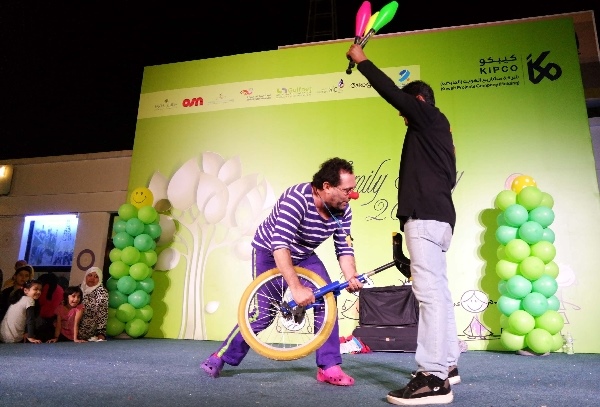 Taking in the local flow of life

I had taken my juggling balls and clubs along and did a bit of training in the park. Had some attention from the locals but not go to the effort of trying to draw them in to make a real show. There was a beach along the way but I don’t think I saw anyone swim or do more than just run around on the sand. A few kids played with a soccer ball but otherwise it was pretty relaxed. I did run into a large parking lot when about 50 guys showed up in their luxury sports cars including some classic hotrods. Seems cruising a parking lot revving the engine of your Lamborghini still amuses people with more money than they know what to do with.

By the time it got dark I was back at the hotel, happy to be able to shower and relax in my room. Trip home was fine. I’m wondering when I might do another such gig. I thought I made a good impression and the agency which said they were also active in Dubai as well as Kuwait. Thought I would hear from them again but then it would go through London and maybe they haven’t maintained that connection.